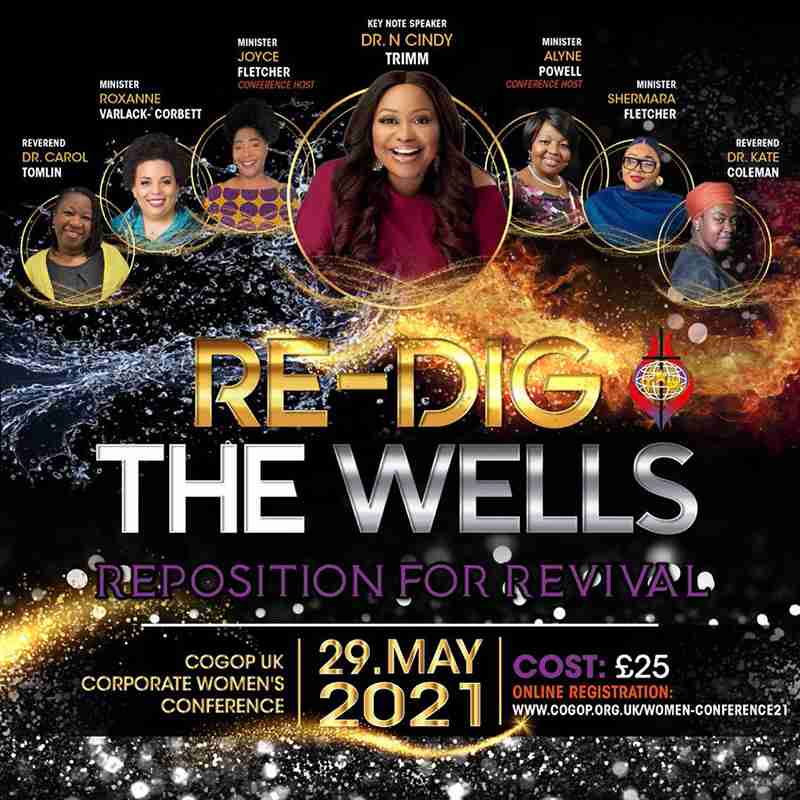 Join us at the COGOP Women’s Conference and Re-dig the wells! Release, renew, restore , recover your prophetic mantle and voice.  Re-dig the wells and reposition for revival.

Come and join us we have a packed programme of inspirational speakers including Dr Cindy Trimm from the USA.

There will be four dynamic workshops

In addition to the workshops you will have the opportunity to share with like minded people by selecting to attend a Connect Group covering an array of subjects from coping with infertility to navigating and overcoming trauma.

17 So Isaac moved away from there and encamped in the Valley of Gerar, where he settled. 18 Isaac reopened the wells that had been dug in the time of his father Abraham, which the Philistines had stopped up after Abraham died, and he gave them the same names his father had given them.19 Isaac’s servants dug in the valley and discovered a well of fresh water there. 20 But the herders of Gerar quarreled with those of Isaac and said, “The water is ours!” So he named the well Esek,[a]because they disputed with him. 21 Then they dug another well, but they quarreled over that one also; so he named it Sitnah.[b] 22 He moved on from there and dug another well, and no one quarreled over it. He named it Rehoboth,[c] saying, “Now the Lord has given us room and we will flourish in the land.” Genesis 26: 17 -22 NIV

As we look at how Isaac repositioned himself and his herdsmen to re-dig the wells that his father had dug many years prior.  We learn about the challenges he had and how he overcame them to Re-dig his wells. God reminded him that he did not need to fear and endorsed his move of repositioning himself.  Come and Join us as we Re-dig the Wells!

This on-line conference is being streamed globally on the 29th May  from 09:00am (GMT)

Dr. Cindy Trimm has dedicated her life to making this world a better place. Taking Mark 16:15 as her mandate “Go ye into the world, and preach the gospel to every creature,” she consistently reaches out to humanity with her goal being to positively impact and transform the course of the global destiny of nations and to leave a legacy of hope, morality and ethics for the next generation.

Dr. Trimm is the author of over thirty  books with her two  bestselling books, Commanding Your Morning and The Rules of Engagement for Spiritual Warfare having sold over one million copies.  Among her recent titles are Hello Tomorrow,  The 40-Day Soul Fast, The Atomic Power of Prayer and Prevail, which also remain in high demand.  As a frequent guest on networks such as CNN, BBC, Daystar, TBN and on some of the largest platforms, she expertly speaks into the issues that confront the Church and the world it serves.

Dr. Trimm is indeed a servant after God’s own heart, a leader of leaders, and a friend to humanity. 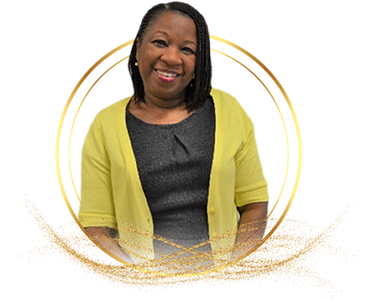 Rev Dr Tomlin is a multi-award winning educator and ordained minister with a long and distinguished academic career. Teaching in universities both nationally and internationally, she held leading roles in several teacher education, Independent Study and English courses, and was a visiting tutor for the MA course at the Queen’s Foundation, Birmingham. She is currently a visiting fellow at the University of Leeds and involved in training ministers as the Principal of Kingdom School of Theology.

With several years of pastoral ministry, as the senior leader of Restoration Fellowship Ministries, she has also worked as a Healthcare Chaplain. Dr Tomlin is the author of several academic publications including her most recent book, Preach It: Understanding African Caribbean Preaching. As a gifted orator, she regularly presents at academic conferences and at various church and community related forums, where she is often invited as the keynote speaker. Dr Tomlin firmly believes in the transformative power of Jesus Christ to change the lives of everyone. 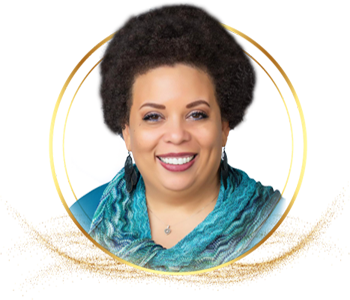 Roxanne Varlack-Corbett is a native of the U.S. Virgin Islands and comes from a loving and musical family. She and her husband Nathan have been married for 30 years and are the blessed parents of 5 daughters and 2 granddaughters.  They served as missionaries to Japan for six years and served in ministry to women, youth, and children.  Since returning to the United States, Roxanne has served the body of Christ as a worship leader, choir director, teacher, and women’s pastor.

In 2011 she completed her college degree with a B.A. in health administration.  She has worked in the community as the choir director for the Salvation Army Community Choir and now voluntarily serves in KAIROS prison ministry international. Roxanne is a licensed ordained minister in the Church of God of Prophecy and often travels to preach and share the gospel.  She is presently serving as the state Women’s Ministry Director for the Church of God of Prophecy in TN.

Shermara Fletcher is a full time member of staff with responsibility for Pentecostal, Charismatic and Multicultural Relations. With roots in the COGOP Shermara is a dynamic millennial Pentecostal leader with significant experience in community organising, ecumenical engagement, leadership development and public speaking. She is also committed to engaging young people and young Pentecostals and Charismatics by creating opportunities for them to exercise leadership and to enter into service in the public square.

Shermara recently contributed a chapter to the book Coming Home: Christian perspectives on housing writing, from a Pentecostal perspective. Edited by Rt Rev Dr Graham Tomlin and Rev Dr Canon Malcolm Brown, and published by Church House Publishing, the book proposes a practical and biblical theology of housing provision as an essential part of community building. In recognition of her ground-breaking work, Shermara was the recipient of the 2020 Exceptional Young Woman award from The Wise Women Awards.

Rev. Dr. Kate Coleman is the founding director of Next Leadership. She has well over 30 years of leadership experience in the church, charity, voluntary and business sectors, and is a mentor and coach to leaders from diverse sectors, backgrounds and communities. Kate completed a term as Chair of the Evangelical Alliance Council (2012-2014), is a former president of the Baptist Union of Great Britain (2006-2007), and a Baptist Minister. A popular speaker and lecturer, Kate has gained a reputation as a pioneer, visionary and an inspiration too many.

She is a strategic advisor who mentors, coaches and supports leaders and organisations locally, nationally and internationally. Recognised as one of the 20 most influential black Christian women leaders in the UK. Her network extends across all sectors and church denominations. Kate is the author of 7 Deadly Sins of Women in Leadership. Her media contributions include the mainstream press, radio and TV. Kate is a Certified Stakeholder Coach and a Fellow of the Royal Society of Arts (FRSA).